Barney Savage Gallery is pleased to announce Entre Vues, the global premier of new work by Debora Cheyenne.
Through an interdisciplinary practice revealing themes of post-web racial and Pan-African identity, the artist has created digital figure paintings and sculptures in soft almost edible color. Cheyenne’s imagery evokes a cerebral approach to Afrofuturism, a cultural aesthetic term that has expanded since the 90s, through themes of science fiction, tech and the African diaspora experience. This influential movement can be found in the work of Jean-Michel Basquiat, Kerry James Marshall, Nick Cave, Julianna Huxtable, and has been a topic of recent exhibitions at the Studio Museum in Harlem and PS1 MoMA. Cheyenne’s interests in post-human concepts are akin to the techno-culture term "Afrofuturism 2.0".
The gallery presents the artist’s sculptures as a table array of whimsical forms physically reminiscent of the disassembled body, with the largest being three heads that is a combination of hyper-stylized African masks and techno post-human idealization. Our inaugural exhibition of the season features an impressive contemporary talent in digital art-making that expands the growing genre in figuration, identity culture and technology.

Debora Cheyenne (born 1991, Paris) graduated from Gobelins and has exhibited in Paris, London and Los Angeles. Her recent new-media artwork is influenced by the spiritual and cultural heritage of Reunion Island. She currently lives and works in Los Angeles, CA. 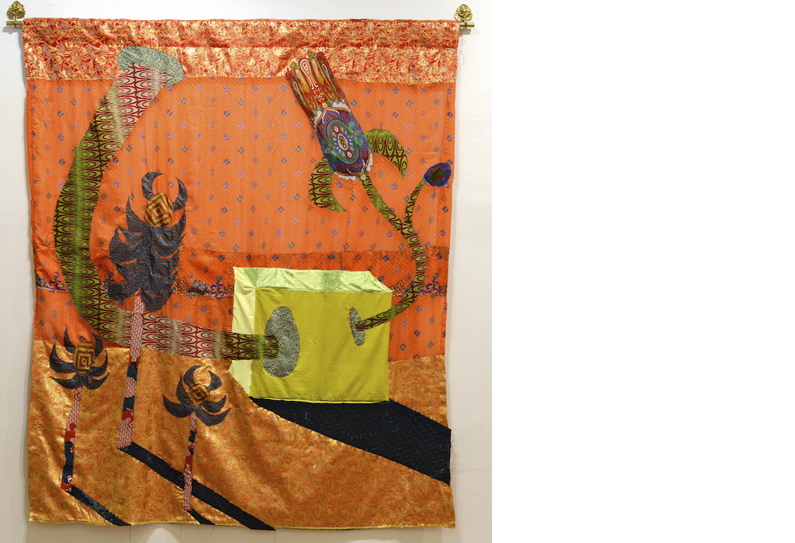 Barney Savage Gallery is pleased to announce Regenbogenscherben, a new exhibition of sewn, textile artwork by Tim Zercie.
Created during residency at the Uferhallen AG studios in Berlin, Tim Zercie sourced fabrics from various locations to cut and sew figurative motifs that grow out of pods and pass in and out of the image with entelechy and inner perfection. Tapping into a range of styles and cultures, the artist sews a garden of figural traces, rituals and festivities to symbolize the growth of musical bonds between generations.
The largest pieces are two functional, 10-foot long window curtains titled: The Shine of Atma, which refers to the Sanskrit word that means inner self or soul. Accompanying Zercie's artwork are two separate creative writing pieces by Stefan Koekemoer, a linguistic scholar, and writer George Lionel Barker, both of whom perform with the artist regularly. These writings are their responses to what they see in the artwork and the artist, through the lens of esoteric occult subjects that the three are connected to psychically.
Sourcing material from all over the world, Zercie presents his work through associations with festivals, rituals, textiles and music, and has created a non-hierarchical visual dialogic through sewn-fabric. 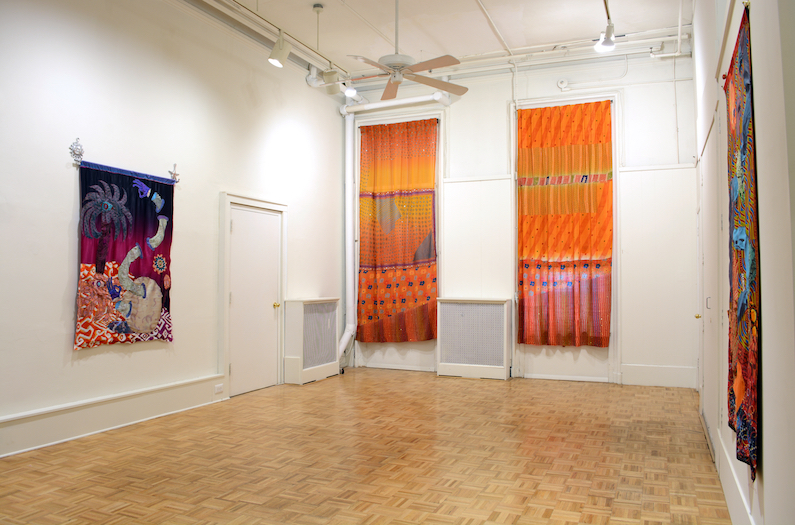 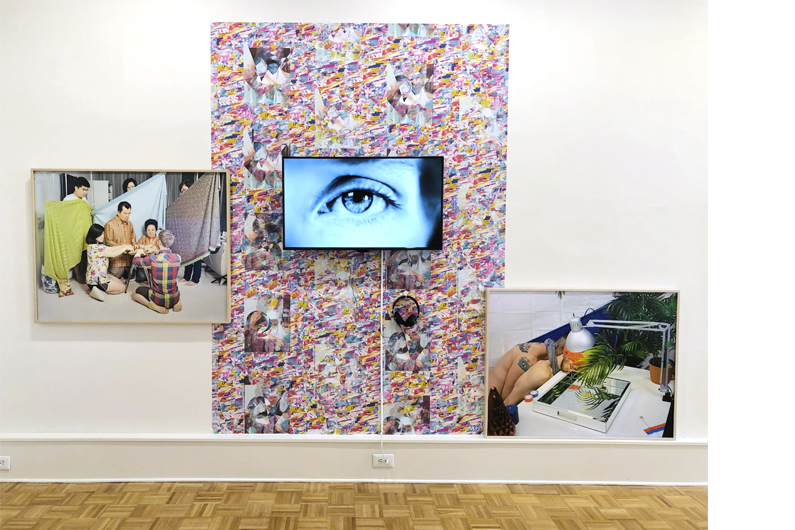 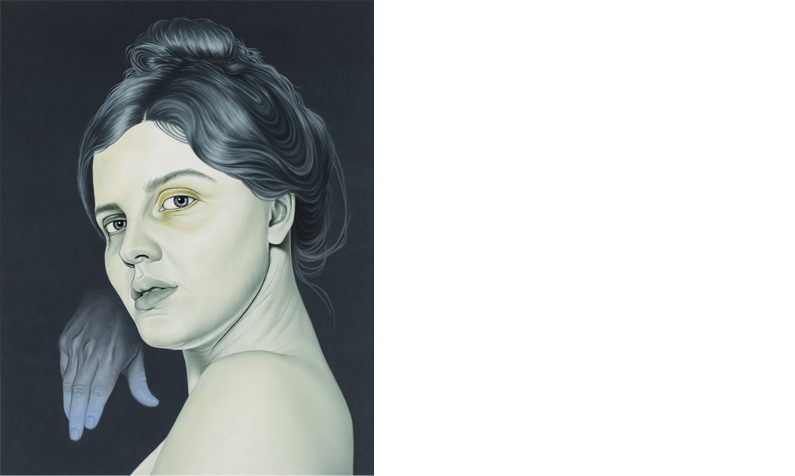 
Barney Savage Gallery is pleased to present our Autumn Invitational exhibition, featuring a selection of artworks by contemporary artists who work in a variety of new, as well as traditional media. Each has shown a significant voice that resonates within a visually compelling and relevant approach to contemporary studio practice.

This is real and that's not 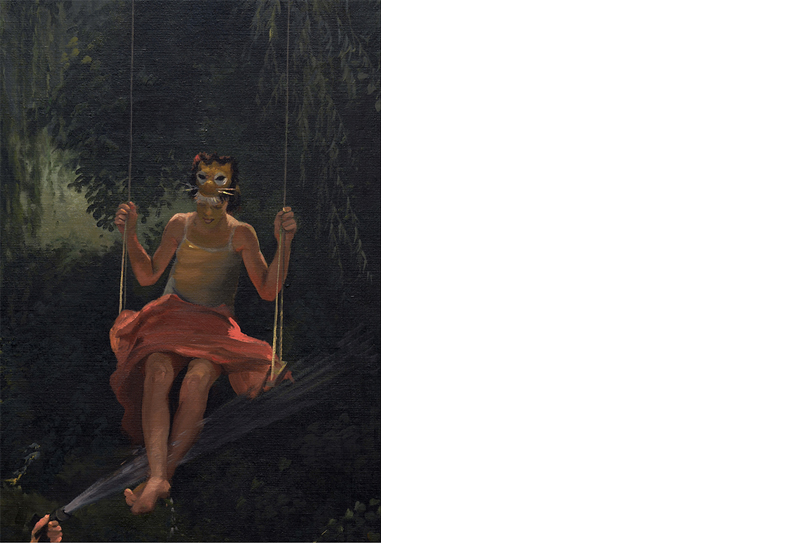 
Barney Savage is pleased to premiere This is real and that's not, a new exhibition of recent paintings by Jillian Denby. Acclaimed for her very large figurative oil paintings, this exhibit presents her work in a more modestly scaled and conceptual level, investigating the quotidian passage of time.

"Nature can be overwhelming and landscape a little removed. With that in mind and viewing it directly, I try to acknowledge its presence, while conceptualizing a fragile observational dialogue". - Jillian Denby

Denby's compositions appear poignantly intimate, as her quasi-voyeuristic observations capture human behavior with painterly alacrity. Working in upstate New York, the artist has the ability to observe directly from nature and incorporate into it what she already knows about the human figure, turning her experience into compelling and credible images. Different days present various atmospheric or climatic conditions that are advantageous to specific images the artist is working with. She often makes adjustments to her environment, in order to reflect spatial arrangements she may desire for her vision. Within a natural wildness she puts together multiple task related activities that appear at the same time, as part of the same image. Looking into the space, sometimes looking out, figure groups are included as they offer human scale to the landscape as well as noise, grouping and color. Working with visual polarities, she pairs chaotic against quiet, busy figures against simple, work-like against serene; things that are not always complimentary, but together create a dynamic balance.
The stark differences between the control an artist has over figures or domestic situations juxtaposed with a lack of control over nature is something to consider in Jillian Denby's work. Through the natural portals depicted in these new paintings one can view the various attempts to dominate wild surroundings. The artist leaves the viewer lost in it, having to just let go.

Jillian Denby was born in 1944 and lives and works in upstate New York. Her work has been the subject of many solo exhibitions in New York and nationally. She is the recipient of three awards from the National Endowment for the Arts, has received two fellowships from Yaddo as well as two artist-in-residence grants at the Roswell Museum of Art. Her artworks are in numerous collections including the Hirshhorn Museum. 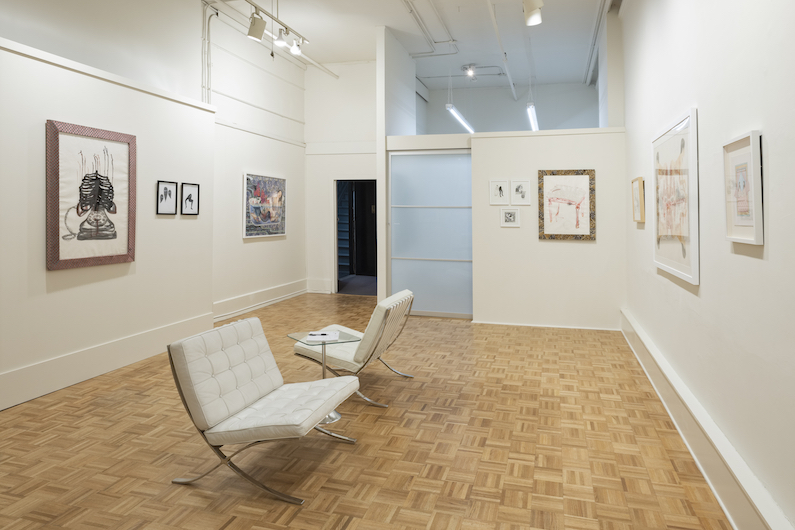 Recasting the title of Françoise Sagan’s iconic tragedy, a line she borrowed from the poem À Peine Défigurée by Paul Éluard, Bonjour Tristesse is an exhibition that looks romantically, if also critically, at certain kinds of melancholia. The eight artists each take a particular illustrative lens, through which they poignantly address social relations, both structural and inter/intrapersonal. The exhibition serves as a reaction against the spectacular in favor of an appreciation of the intimate. Through a deliberate focus on the body, its gestures, and expressions each artist creates a world of emotion, an interior narrative sometimes opaque in details yet, overflowing with tone. An intuitive collection, the work selected here is as much about looking at others as it is about looking at one’s self… To borrow from Oscar Wilde, “It is the spectator, and not life, that art mirrors.” Much like the protagonist in Éluard’s poem or even Sagan’s novel, we find ourselves alone, gazing longingly at a beautiful misery, just out of reach, and yet somehow all too familiar. 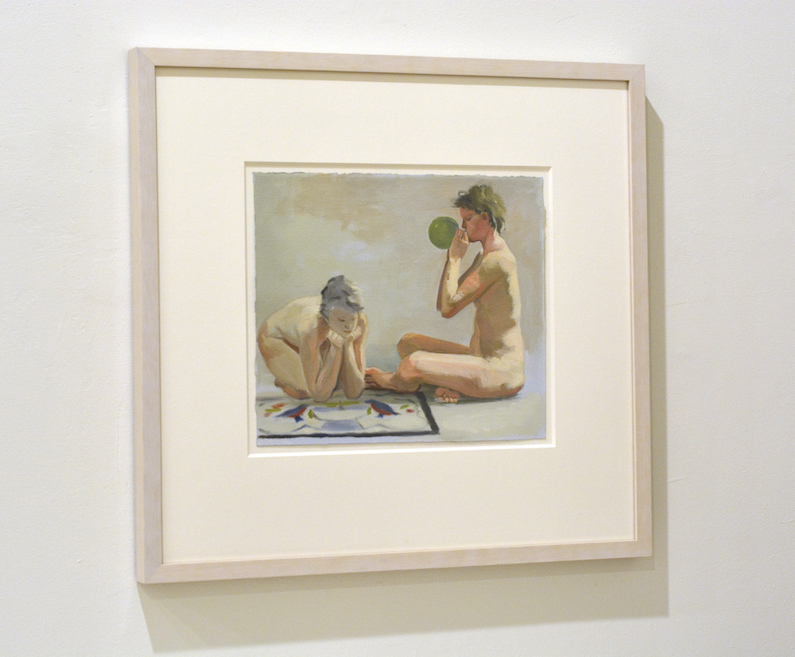 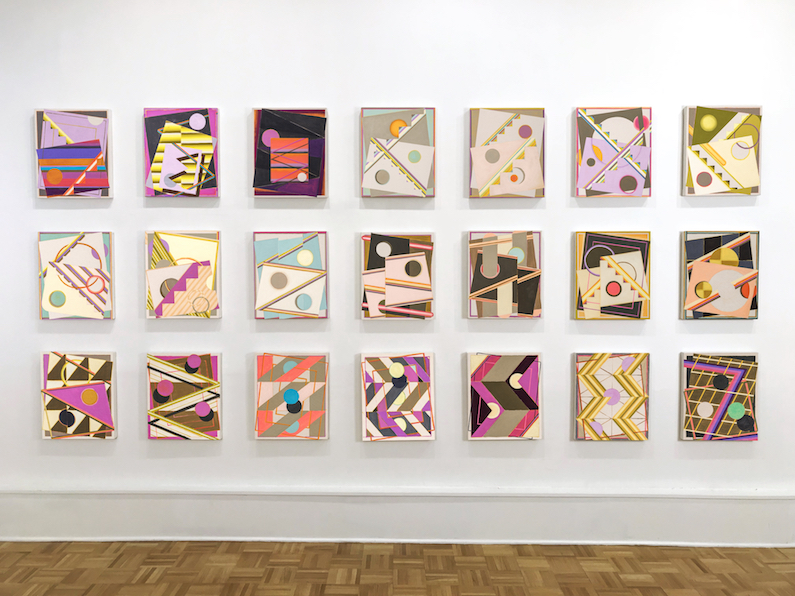 
Working with self-imposed structuralist plans, Paolo Arao set out to create a new 18 x 15 inch painting in a single session each week during the 2017 calendar year. The result is a body of 52 dynamic paintings that explore the idea of queer imagery without the depiction of the body.
The gallery is pleased to present all 52 paintings in their entirety, some of which are done directly on canvas or linen while others are pieced and sewn together. They have been hung in grids throughout the gallery creating a week-to-week fluidity. The installation serves as a calendar of sorts, where no piece is more important than the next but each contributes to a continually evolving queer narrative.
In her catalog essay “Yearbook Paintings: Queering Abstraction” (Paolo Arao – Yearbook - 2016) Olivia Murphy writes:
“David Getsy proposes a theory of queer formalism, stating that although forms themselves may not be inherently queer, the relationship between forms can be. He goes further to posit that queer formalism can ‘examine the ways in which forms exceed boundaries; how they behave differently in different contexts; how they are being deployed against their intended use; or how they disrupt the ostensible meaning of a text or an image’s claims to naturalism (in style or content).’ [“Queer Relations” ASAP/Journal, May 2017]”
Establishing a structural challenge with a few rules gave Arao a heightened sense of freedom that can be found in the presence of overcoming an opposition. Arao’s identity and life history became a reference for his weekly exercise in pushing the boundaries of his visual language and through different themes and variations, the artist also identified connections between a nomadic life growing up in a military household, moving from location to location. Each painting’s title begins with a number for each respective session followed by a description in parenthesis, alluding to personal or queer narratives that further challenge viewers looking for a “straightforward” meaning in a title.
His approach to image making resonates within changing meanings of queer identity, also seen in the work of artists like Elmgreen & Dragset, Robert Rauschenberg and Felix Gonzalez-Torres. Paolo Arao brings an innovative in-tune sense of painting in a time of fast imagery and employs a personal vernacular of abstraction to challenge structures of gender and identity by bending or queering the geometry in his chosen motifs and color sensibility.

Paolo Arao (b. 1977, Manila, Philippines) has had solo exhibitions at Jeff Bailey Gallery in NYC and Franklin Art Works in Minneapolis. Residencies include: Skowhegan School of Painting and Sculpture, The Studios at MASS MoCA, Fire Island Artist Residency, the Bronx Museum of Arts, the Wassaic Artist Residency and the Vermont Studio Center. He received a NYFA Fellowship in drawing in 2005. His work has been recently published in New American Paintings, Maake Magazine and Esopus. He received his BFA from Virginia Commonwealth University and is currently a Keyholder Resident at the Lower East Side Print Shop in NYC.

Amulets Ethereal contemplates humankind's capacity for resilience and self-preservation through the presentation of individualistic artworks united by the shared motif of protective coverings. By being presented together, the artworks are recontextualized as mystical objects with the power to shield the viewer from the most tenuous of perceived dangers. Concurrently, interwoven throughout the exhibition is imagery that conveys technology’s indifference to these human fears and its potential to allay or precipitate them. 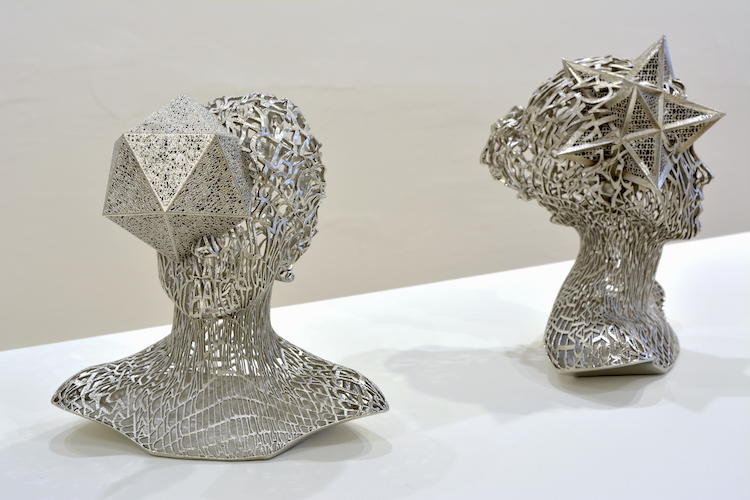 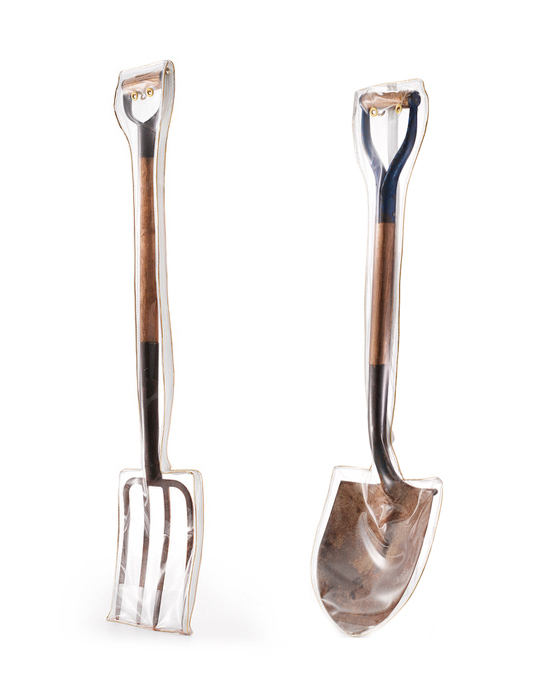 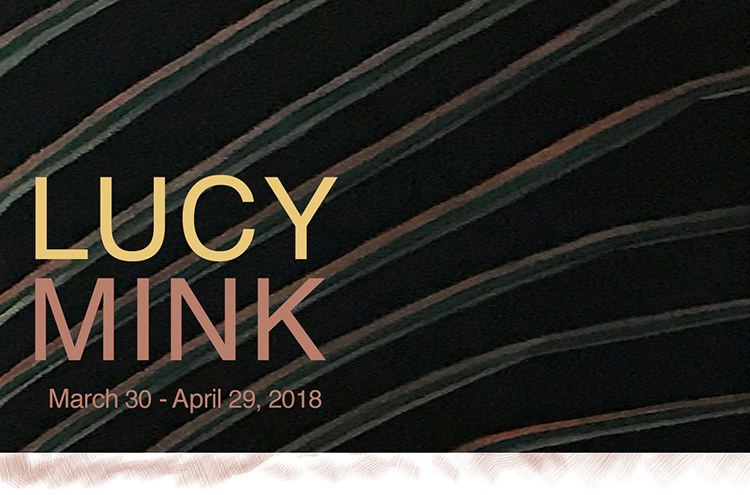 Barney Savage is pleased to present Lucy Mink, in her first solo exhibition at the gallery.

There is a unique exuberance in this selection of new oil paintings. These modest worlds all have an inner space that is alive with the movement of bright floral hues. They both spring forth at one moment, with visual poetry, and elegant gestural brush strokes; creating movement and guidance for the eye; while then retreating into intimacy. The corners of inviting shapes, and terrains play on figure ground relationships, and are cloaked with patterns, and motifs reminiscent of quilts, fabrics, and flattened color relationships.
There is a story here, undefined by narratives, and instead is a moment like before a blanket settles on its resting object, whether that is a love seat, or a mountain, or a coalesced space, somewhere between still life, and a full heart.
The titles of these exhibited paintings invite further intrigue. Some resonate like a glib answer to a question spoken between close friends. Others are like notes, and reminders that have a subliminal familiarity, that almost complete the experience of viewing, by returning you to your own subconscious order.

Lucy Mink, b. 1968, was recently included in Color We’ll, Curated by Alex Allenchey, at Barney Savage Gallery. She was a grant recipient for the Pollock-Krasner Foundation in 2012, and has since been exhibited in New York and Brooklyn. She is the upcoming artist-in-residence at Dartmouth College, NH, and will be exhibited at Dartmouth’s Jaffe-Friede Gallery, Fall 2018. 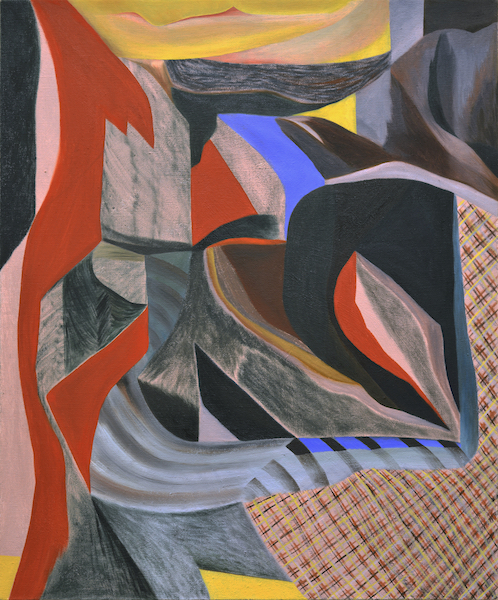 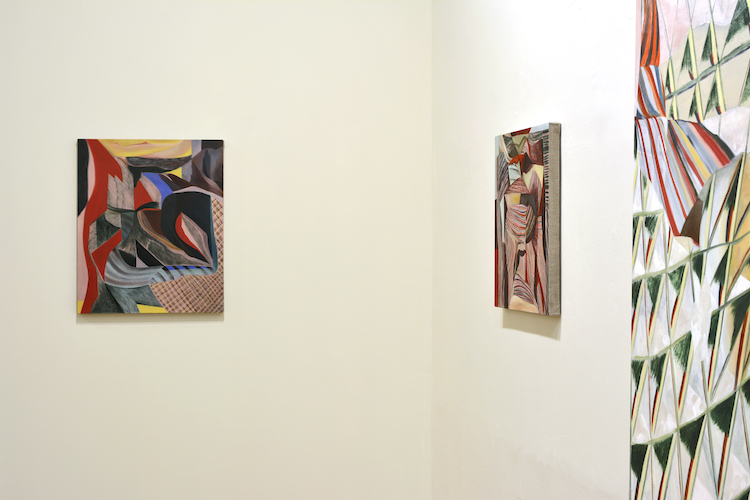 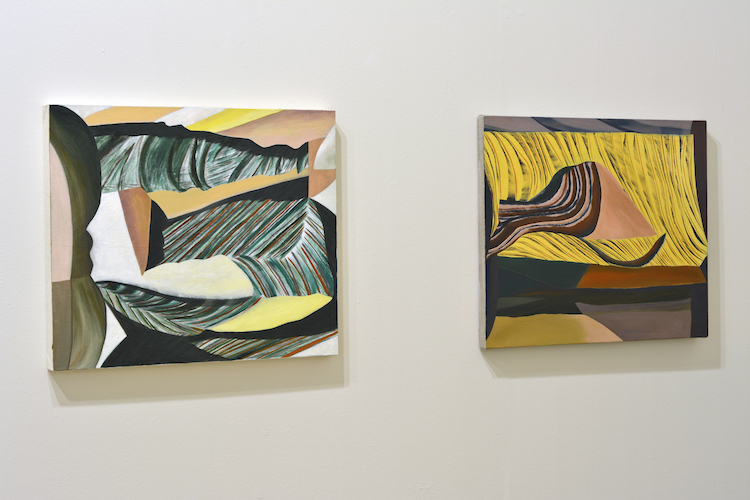 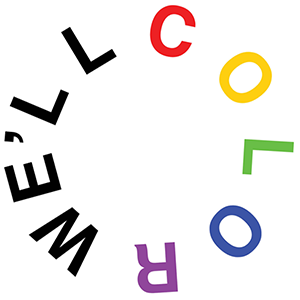 Color We’ll brings together a collection of painters whose work, while all rooted in abstraction, proceeds in different directions, like spokes from a central axle, showcasing their own personal revolutions within a larger movement. Each artist traverses a unique aesthetic avenue and leads the viewer, either in a direct or more roundabout way, toward an individual experience of form and color that is both distinct and dislocating, intimate and unbound.

Theresa Daddezio’s paintings are populated with organic yet otherworldly shapes. Subtle shifts in tone conjure a tangibility from optical effects, and imply that there may be even more than what the eye can comprehend. Drawing inspiration from incidental details of everyday urban life, Andrea Bergart melds textures and painting techniques from her personal travels and encounters to create patterned pieces full of vibrant colors that call our attention to the often unnoticed and accidental splendor of the world around us. 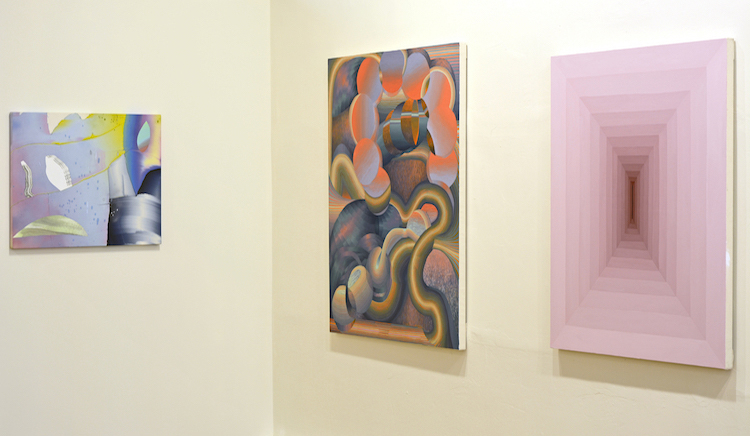 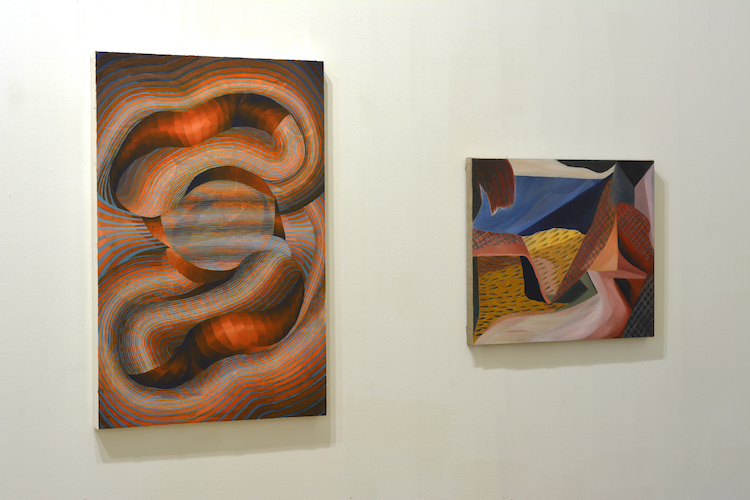